Vogue: Why We Moved Into An Airstream To Drive Across America In 2020

When we first considered leaving our San Francisco apartment to move our family of four into a 25-foot Airstream trailer, we wondered if we had both gone COVID-cuckoo. The thought of abandoning our safe, cozy home in the middle of a global pandemic and social justice movement seemed like a terrible idea. Our apartment for the last four years, in the Inner Sunset neighborhood, felt like more than just a rental unit to us; it was a part of our family. It was the first home for our two young boys; the place where first steps, first laughs and first words were etched into our memories. Pencil-marked growth charts, purple paint blots and spaghetti sauce splatters on the white walls told the stories of our first years as parents. How could we give this place up at a time when our home was now also our shelter, the only truly safe space from this potentially dangerous virus?

As a couple, we’ve always been nomadic nature lovers. We grew up in Miami, Florida in immigrant families from Colombia (Dana) and South Africa (Jaron). In our twenties we reconnected while coincidentally living in the Middle East and have since lived together in Brooklyn, Miami, and San Francisco. Dana focused on arts and design and became a textile designer, founding her eponymous line of home goods. Jaron started his career as a video journalist and filmmaker before founding Storyhunter. While living in Tel Aviv, we spent as much time as possible camping in the Sinai desert, the Galilee, or near our favorite wadi on the Dead Sea. When we got married, we did so in Colombia. Our honeymoon was in the “Nature Island” of Dominica where we explored hot springs and hiked through most of that stunningly beautiful, Caribbean country. Now, with our two young boys in tow, we seem to always thrive when we are out in nature, whether it’s a day at the beach, park, or on the trail. 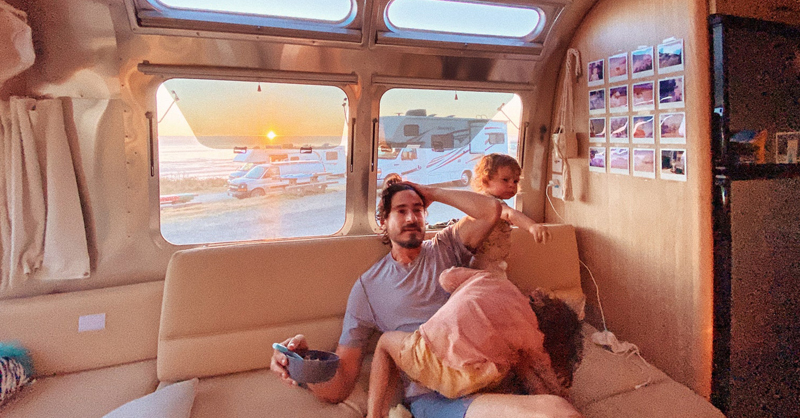 In 2016, we moved to San Francisco while Dana was seven months pregnant with our first child. We fell in love with the city for its mix of special people, vibrant culture, and natural beauty. Part of the charm of living in a city lies in the random interactions you get to have with people, which in San Francisco was always quirky and wonderful. The city handled the virus relatively well, shutting down earlier than most and flattening the curve. Still, like so many people with kids, we found ourselves in a hamster wheel with no apparent exit ramp, moving between never-ending chores, reading bad news, managing home-schooling, home daycare, home-cooking, and working from home. We missed our friends, the farmers markets, and playgrounds that allowed us some reprieve from the grind. Now, smiling strangers were concealed by ominous-looking masks. The city went from being kid-friendly to an obstacle course of places we needed to avoid with curious toddlers. The Golden Gate Park and Lands End trail kept us sane, but as the pandemic persisted, it became clear the city was no longer giving us what we needed. With our kids’ pre-school closed, Jaron’s company distributed around the country, and Dana’s events all moving to virtual formats, we no longer felt the need to be tied to San Francisco, or any place for that matter.

One late afternoon in June while staring out of our dining room windows at the deep blue Pacific, the fog rolled in stealthily, muting the color of the sea and blanketing the Cypress trees. We thought about the state of the world. Everything was moving so quickly, intensely, and on the surface, negatively; COVID-19 had killed nearly hundreds of thousands of people worldwide, the global economy was in a free fall, the United States seemed more like the “Divided States,” and the climate crisis was getting worse with each passing day. As a family, we needed some time to reflect on all this change. We re-considered the opportunity to travel. On a personal level, we missed our family on the East Coast and knew we wanted to ultimately get back there so our kids could see their grandparents, aunts, uncles and cousins outside of FaceTime. We thought about what it would be like to travel around this big country, with its vast and wild landscapes. We had seen so much of the world, but didn’t really know so much of our own country and its dream places like the Olympic, Yellowstone, and Glacier National Parks. These parks were probably safer spaces than San Francisco, or any crowded city for that matter, from a COVID-19 perspective. As scary as it sounded at first, and as guilty as we felt on some levels, we recognized that this was exactly what we needed to do in order to flip the script for 2020.

In a span of a couple weeks we sold everything we owned, put the rest of it in storage, bought a white Dodge Ram pickup truck, a 25-foot Airstream trailer, and moved into it.

Check out the full article from Vogue here.