Once Again, A Pandemic Has Stoked Americans’ Love For National Parks

Americans aren’t leaving home much, but when they do, they’re flooding into open spaces amid the worst pandemic in generations.

Using anonymized GPS data from mobile phones, Google estimates travel outside the home was 7% lower in September than at the beginning of the year, a gradual increase from the 23% drop seen in April. Every destination Google is tracking, from retail to office to restaurants, has seen a moderate to severe drop except one: parks, a category including everything from public beaches, dog parks, and marinas to national parks. 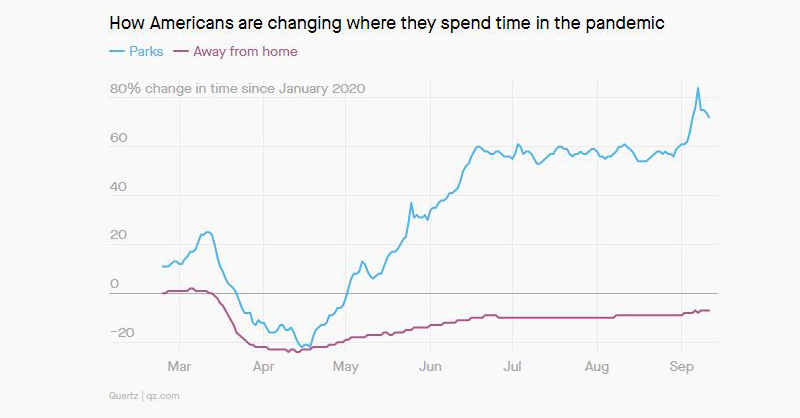 Those visits are overwhelming parks—most of which were already at a breaking point. Utah’s majestic Zion National Park, home to soaring red rock arches and desert waterfalls, resembles a crowded amusement park most days. There were 4.5 million visits to the park in 2019, for a park with parking to handle less than half that number. It’s not much different at national gems such as Rocky Mountain National Park or Yellowstone, where waiting times to get on the trail may exceed your time in the wilderness by four to one.

The coronavirus has driven visits even higher. After shutting down at the onset of the pandemic, park rangers reopened the doors to throngs of visitors desperate to escape their homes and cities. Several parks have neared record attendance despite national and international travel restrictions, as well as the closure of many of the park’s businesses, campsites, and entrances. Yellowstone saw visitors rise slightly above 2019 levels in July.

Some relief may come from billions Congress recently allocated to the nation’s park system as part of the Great American Outdoors Act. But limits on attendance and traffic jams are becoming the norm in many places once revered for the great outdoors.

Check out the full article from Quartz here.